There is a handmade, vintage inspired, cowboy boot store.  It shuffles about a few locations in Austin, Texas.  It finds a permanent home on South Congress, a famed shopping district in the live music capital city.  The cowboy boots are grand.  You can tell by first glance they are extremely well made.  They stand the test of the fourth and fifth glance etc....  Many have a love affair with these handmade, vintage inspired cowboy boots.  Many more will come.

A couple walked into the boot store after relocating to Austin in an effort to purchase the best handmade cowboy boots they could find.  He, an Englishman immersed in the Irish music scene, in fact a professional musician, a unicorn of sorts, Steven Twigger.  His wife, Alie Twigger, a creative and inspired New Englander from Cape Cod, Massachusetts.  They each purchased a pair of Heritage Boots.   Drawn to the superb craftsmanship, Alie began working for the founding couple, Patti and Jerry Ryan.  She contributed to the designs as well as marketing.  She remains a Boot Maven today.   In fact, she and her husband own the store with one more.

A spirited, all things cowgirl enthusiast and native Texan, Kimber Breaux morphed into a maven. She embraced the culture and the exquisite product at Heritage Boot.  The old world methodology that ensures the integrity of the product served as sturdy foundation to her growth and metamorphosis from a children’s song writer, former fitness professional into “Boot Mavenship.”  She too remains one today.  In fact, she is the one more that now owns the store.

This fully handmade, vintage inspired cowboy boot store in the Historic South Congress shopping district in famed Austin, Texas partners with a badass bookmaker.  He is multi generational, inheriting the passion, inspiration, and talent of his father and his grandfather before that.  His daughters are both now active in the boot making process.  It is a way of life for them.  Their grandfather began as a custom boot maker.  They have successfully grown the business.  Their boots are unmatched in quality, comfort, and old world design.  Their visions combined with the owners of Heritage Boot have ignited a rebirth of the Golden Era of the Cowboy Boot - the 1930’s thru the 1960’s and even a dash of the coolest clothing decade, the 1970’s. The partnership works.

Heritage makes a handmade boot that bridges the gap between a full custom boot and a factory, mass produced boot.  They make custom-quality boot you can walk out the door with the same day you walk in.  Their boots are made by craftspeople who use their hands in creating every aspect of the boot.  They are multi generational artisan boot makers who spent years perfecting their craft.  Their boots are their legacy.  They use Goodyear welting, layered leather soles, and lemonwood pegs in the construction of their classic or soon to be classic designs.  Their small batch produced cowboy boots are grand.

This is the beginning of Alie, Steve, and Kimber’s expedition to cross a newly acquired portion of the western apparel and accessory world.  They look forward to continued discoveries and innovative ideas to come.  They love what they are doing.  They want you to share and experience this affection as well.

“I remember first seeing Barney Kessel, in the 1940’s, standing on the corner of Hollywood and Vine, in his cowboy boots, sun glasses, hipster threads, holding his guitar case man, you just knew that cat could wail!’    Anita O’Day

Also in About Heritage Boot - All Articles

Once Upon a Time

Have Questions? We Have Answers.

How to Care for Your New Cowboy Boots!

I’ve got a soft spot in my heart for this place! Kimber was the first person to notice my baby bump and yesterday, that same baby WALKED with us into Heritage and helped us pick out our wedding boots! I’ve had my eye on Miss Holliday for years. Go ahead and try them on, and you’ll walk out the door with them on just like I did…because not only are they art on your feet, they’re like walking on a cloud. They’ll make you realize that you’ve been wearing the wrong boot all along if they aren’t from Heritage. And the customer service is the absolute best; I felt like I was hanging out with friends. I’ll update this with wedding photos! 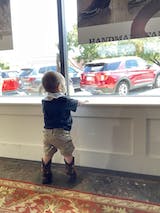 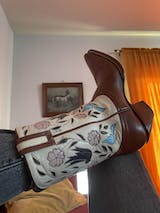 J
Shark Boot in Black - French Toe John (Baton Rouge, US)
If you’re only going to have one pair, these are the ones

I’ve been wearing my Heritage shark boots since 2013. They’re the most comfortable best fitting boot I’ve ever owned and get remarks each day I wear them (which is often). Thank You Heritage! Also, Heritage have my name and boot size now and have mailed me two other different sets of boots “sight unseen” via a phone call, that fit perfectly! 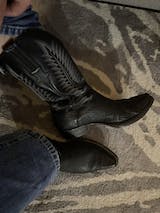 These are by far my favorite boots I own now and it’s not even close. The fit and comfort is honestly out of this world. I don’t wear my Luccheses and Justins anymore. I just never want to, now that I’ve tried Heritage.

The one, singular knock I will put against Heritage is the fit is non-standard. I really can’t stress and recommend enough that you go in person to try the boots on.

Best.pair.of.boots hands.down! i challenge you to find a finer pair of Sting Ray boots. infact im so impressed that im probably going to purchase the Caiman snip toe soon. The owners are awesome peeps too!

I was looking for a unique set of boots for months, with nothing coming up. Then I stumbled on Heritage Boots, and found their amazing lineup. These caught my eye immediately, the unique multirow stitching, heel and toe all screamed that ‘vintage, unique’ look as if I were buying a set of Hank Williams boots. Very well fitted, comfortable. Feel like I’m standing on the Grand Ol Opry stage right now… 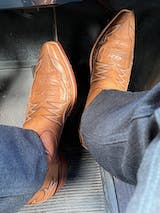 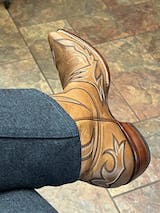