Our famous oil tanned leather is practically bullet-proof. It develops a patina that just gets better with age. Can stand a good beating. That said, our Apache Boot is stylish and well made. And, yes, like all of our boots, they are crafted with the requisite lemonwood pegs, natural welt (with notches), and all leather heels. This is the basic cowboy boot you will go back to, time and time, again. Trust us.

First and foremost, there's nothing I'll be saying in this review that isn't said in Heritage's own description of the boot in fewer words. Truth in advertising! Secondly, I'd like to be clear that as a near life-long horsewoman I don't use the term "sh*tkicker" disparagingly in the least.

"Sh*tkickers" are hard-wearing boots for hard-working people who won't just be braving muck and mud every now and then but as a daily matter of course. Many if not most high-end cowboy boots may instead be referred to as "city boots," and feature softer leathers with finishes that may appear notably blemished with scuffs & scratches or that may be rubbed through with frequent friction such as what they might experience while riding in a saddle. Heritage does a great job of suggesting what type each of their boots is intended as in their description. Sh*tkickers are never going to be quite as outlandishly glam as some city boots may be, and city boots will generally never be quite as rugged and inexhaustable as sh*tkickers. There's nothing wrong with either, and some boots may have features from each, but generally that trade off will still show itself somewhere.

As for the Apache, the oil tanned finish is perfection. Some may be surprised on first feeling the leather that it isn't as "sumptuous" as it appears or in comparison to leather on other Heritage boots. That's okay and part of the point! As they say, there really is little you can conceivably do to the Apache (besides shoot it with buckshot, I guess...please don't do that) that will make them look worse for wear. Want to ride in them every day? Do it. Every mark these get looks less like a blemish and more like the distinctive and character-building lines on a wise elder's face. Have a bad day and kick a long spined cactus? Not to worry--these boots just accumulated more wisdom of elders for you.

The brown is my personal favorite for the oil tanned finishes as it has, to my eye, the greatest depth and variation of color. The leather is mostly the rich dark brown pictured, with hints of the whiskey-toned color that appears more vividly in places where the leather is stretched, scuffed or scratched. You can view this in Heritage's close-up of the heel, where hints of whiskey color appear in a perfectly new boot from the construction process alone.
I have fairly wide feet, a normal arch but high instep, so my Apaches first stretched along the instep simply while putting them on, and then stretched and creased some along the ball of the foot and toe. In the photo I attached with jeans, which is actually from the first couple days I had the boots, and you can see that color variation beginning to appear in those spots. The photo on the white is maybe a few weeks later when, while still new, those stretching points had a while to settle in more. A brand new stretch, scuff and scratch will always be lighter in color than a mature one on this kind of leather; this is part of the well-worn "patina" effect.

For care, clean as needed and give them a nice rub down with a good conditioning oil every 3-6 months depending. When you oil them, it will darken up the stretched and scuffed parts, though this will ultimately be temporary especially in the stretched spots as they will always show those whiskey tones with continued wear, with the overall effect of a well-worn Apache being a one of a kind pair of boots, similar to the way you can create one of a kind fades on jeans made with raw denim. Clean, there's no reason these boots don't look good enough to wear proudly around town--they just don't beg for attention like some boots do. These boots, a good pair of jeans (maybe those raw denim ones I just mentioned?), crisp white t shirt and a good hair day? Mercy, it's a good look.

As for fit, I mentioned previously I have relatively wide feet with a high instep. The snip toe style is designed in such a way as to not pinch the ball of the foot, and the leather uppers are supple enough to give to the wearer, even in the otherwise ultra sturdy leather on the Apache. One sort of odd thing between the toe styles that I've never observed in boots before is that I actually find Heritage's pointed toe style slightly wider fitting at the ball of the foot than the snip toe, though the snip toe still wears very comfortably for me after just a few hours of breaking in. Frequently, pointed toes are more narrow and elongated, but that's not the case for Heritage. Hopefully that's helpful to someone.

All in all, great boots from a great company. Excellent customer service as always, be it in store, online or by phone. It's really impossible to go wrong with a pair of the Apache, in the city or out of it. Thank you, Heritage! 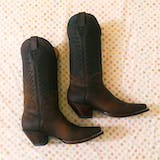 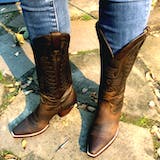 The quality of these is phenomenal and the fit was perfect. Extremely comfortable. The shark vamp and counter with rough out shafts are different but very classic. Highly recommend.

I've resoled these black Sue's twice. I have pinched forefoot nerves and flat feet and my ankles roll and still I've walked 10 miles a day in these. Went back to HB a few months ago and just decided to get an entirely diff pair since these are doing so well (peewee honey). I wear Sue to work at an investment bank in NYC. Their vibe blends in with skirts and suits if you can believe it. They're the best airport shoes too, even if they don't make it through precheck.

Went in for the Save the Bees boots and there was only one pair left before they get a new shipment - and they were MY SIZE. They are gorgeous and it was meant to BEE!!!

A
Marie Laveau A.S. (Los Angeles, US)
The DREAMIEST boots!

I feel the same way about these boots that the kid from “A Christmas Story” felt about his Red Ryder BB gun. 🤣 Seriously though, these are probably the most beautiful boots I’ve ever owned. They’re absolutely gorgeous, and the design and craftsmanship are impeccable. Looking forward to wearing them forever. 14/10 recommend!!!! 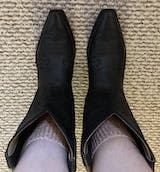 A
Marie Laveau Amanda Pendleton (Dallas, US)
So versatile

I wear these with everything! I’ve had them for two months and wear them at least three to four times a week. I love the walking heel!